As challenges facing the agricultural industry mount up, technological developments around drones and robotics could form part of an effective long-term solution, says Dr Khasha Ghaffarzadeh, research director at IDTechEx

Agriculture is facing major long-term challenges. Some forecasts suggest that world population is set to grow by 2.3 billion by 2050. This, together with rising global income levels that typically increase food demand per capital, would require raising food production in 2050 by 70% compared to 2005 levels.

In parallel, the world continues to urbanize at pace. Indeed, forecasts suggest that 70% of the world population will live in urban environment by 2050 compared with nearly 50% in 2009. This will adversely impact the availability of labour near agricultural lands. Add to this the facts that in many countries, particularly in the developed world, farmer population is ageing fast and that wages are increasing.

Furthermore, many agricultural activities demand seasonal labour. In many instances accommodating this need would require continued flexibility towards migrant workers, an objective that may become more difficult in places in the light of events such as Brexit. It is within this context that automation of agricultural tasks finds its economic purpose.

In parallel to all these structural challenges facing agriculture, our current production processes can often have long-term unintended environmental and health consequences. In particular, the use of non-selective herbicides continues to be a source of concern in Europe. As we shall explain later in this article, the advent of agricultural robots can accelerate the uptake of ultra-precision agriculture, helping enable farm management on a site-specific, and then later individual planet-specific, basis. This would result in an optimal use of agrochemicals tailored to the needs of individual sites or plants.

It is often assumed that agriculture is averse to innovation and therefore would be no place for the adoption of robotic technology. This would, however, simply be wrong; if we take a long-term view we will find that agriculture was one of the first major industries to adopt technology to boost its productivity. Indeed, employment- as a share of total- has been steadily declining in agriculture for centuries despite the fact its output per unit of labour has been increasing.

This productivity gain is due to new technologies. This gain has stemmed partly from better seed and agrochemical technologies that have boosted the yield per acre, and partly from better tools and machines such as powerful tractors and implements. Indeed, many robotic technologies can simply be viewed as the next incremental evolution in agricultural machinery technology that has over time seen farmers swap their manual sickles with horse-drawn implements and then with mighty tractors. 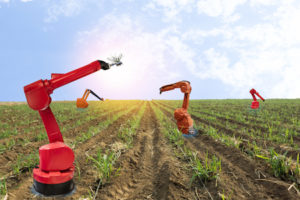 At IDTechEx Research, we have been analysing the technologies and markets for agricultural robots and drones. In our report Agricultural Robots and Drones 2018-2038: Technologies, Markets and Players, we analyse numerous robotic development taking place in the agriculture including robotic fresh fruit harvesting, robotic milking, etc. In this article however, we have chosen to primarily focus on two development axes within the world of robotics that are impacting agriculture: (1) advanced vision and (2) autonomous mobility.

When reading this you might wonder why this is all becoming possible now. Indeed, many ideas discussed here are decades old, but they are only becoming commercially viable now. The short answer is that this is now increasingly possible thanks to dramatic year-on-year improvements in the performance and price of computing power, sensing technologies, energy storage, electric motors, and so on.

Vision technology is already in use in agriculture. A simple use case is in organic farming. Here, a tractor-pulled implement must be precisely driven along narrow rows to mechanically hoe out weeds. Here, basic vision technology can help: a camera mounted on the implement traces the crop row, identifying objects outside the row as the weeds. It then controls a side shifting mechanism to adjust the position of the mechanical hoe, thus helping alleviate the burden of precision driving of tractors.

The technology is now fast evolving. The later generations are essentially multiple ruggedized computers and camera systems integrated into the tractor-pulled implement. These systems take images as they are pulled along the field and identify weeds vs. crops. The systems then control a precise de-weeding mechanism, e.g., precisions spraying of the right selective herbicide, to take site-specific actions.

The vision technology here is much more powerful than the simple row-following approach. Here, deep learning algorithms are trained to identify crop vs. weed and to later differentiate between various weed types. This is no easy feat and cannot be achieved towards using traditional script-based approach towards programming. Simply put, this is because one is dealing with complex and variable entities that change shape and appearance during their growth. These algorithms can also become trained on smaller datasets than might be required, say, in autonomous passenger car driving since one is not dealing with matters of life and death.

The technology here has already been demonstrated and indeed commercial activity is accelerating. For example, last year we witnessed the first major start-up acquisition with a price tag exceeding three hundred million dollars. These are still early stages: the hardware is custom built by start-ups without the know-how, the farmers do not yet fully technology, and companies are offering their robots as a service to de-risk the adoption for end users. These however clear demonstrate the shape of the near future: ultra-precision agriculture enabled by advanced computer vision.

Autonomous mobility to give rise to new breed of agricultural vehicles?

Agriculture is the leading adopter of autonomous driving technology despite all the hype around driverless cars. Here, first came tractor guidance, helping drivers drive more accurately and relieving some of the pressure of maintaining driving accuracy. Next came autosteer, giving the operator the ability to programme a map into the tractor and let it navigate autonomously. Indeed, last year we forecast that more than 270k autonomous tractors (level 4 and 5) will be sold in 2018, rising to more than 500k by 2023. 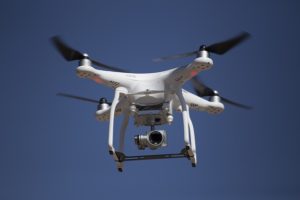 Technology is now evolving towards full autonomy. Master-and-slave (or follow-me) systems are being trialled, enabling one driver to guide a fleet, thus boosting the driver’s productivity. Next will come manned yet fully autonomous tractors (level 5). This has already been technologically demonstrated. Here, the vehicle’s sensing suite must be expanded to enable it to avoid collision and operate even when the GPS signal is lost.

The next stage will potentially be unmanned autonomous tractors. Indeed, we have already seen early technology demonstrators. Currently, however, the farmers want to stay in charge, thus the cab is likely to be kept in the design. In the long term, however, the meaning of staying in charge will change, transitioning from driving the vehicle to, for example, remote fleet operation/management.

Taking the driver out of the equation can have profound consequences for the way we envisage agricultural machinery. The well-established notion that bigger is better has its origins in the need to enhance the productivity of the driver but this notion loses some of its relevance if farm vehicles become autonomous and unmanned.

This is because autonomous mobility will enable fleet operations by eliminating the wage bill overhead by vehicle. In this case, a few persons will remotely monitor and control the operation of a large fleet. Here, the productivity of individual units may be lower than traditional powerful vehicles such as tractors but the overall productivity- at the level of the fleet- could be higher.

We are currently at the beginning of this process. Research entities have demonstrated working prototypes and numerous companies have been established to commercialize such agrobots. Indeed, some are already selling small number of units.

These are major long-term evolutionary changes. They will help address some of the long-term structural challenges facing agriculture: increasing demand for food production, dwindling and ageing workforce, rising wages, environmental concerns, and so on.

These changes represent enormous opportunity for innovation and value creation. In Europe today, the research activity is taking place in small islands and often on a small scale with little funding. European Union should thus increase its research commitment to create integrated large-scaled and well-funded research programme.

Furthermore, these changes may shift the skills needed in the operating a farm. In general, data, analytics and robotics will increasingly take on a more prominent role. The European Union should thus find ways to equip farmers with the right skillsets to best utilize these new technologies. 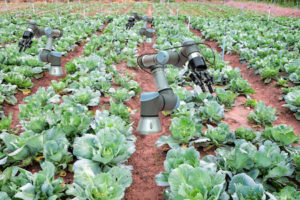 Finally, these technologies may grow to become a commercially viable alternative to some farming practises today that represent environmental concerns. The increasing availability of a viable substitute will thus make it easier to tighten the regulation and even ban certain chemicals. This action will create a virtuous cycle that will further spur on innovation by providing a major additional commercial incentive.

This article was originally published in Government Europa Quarterly.